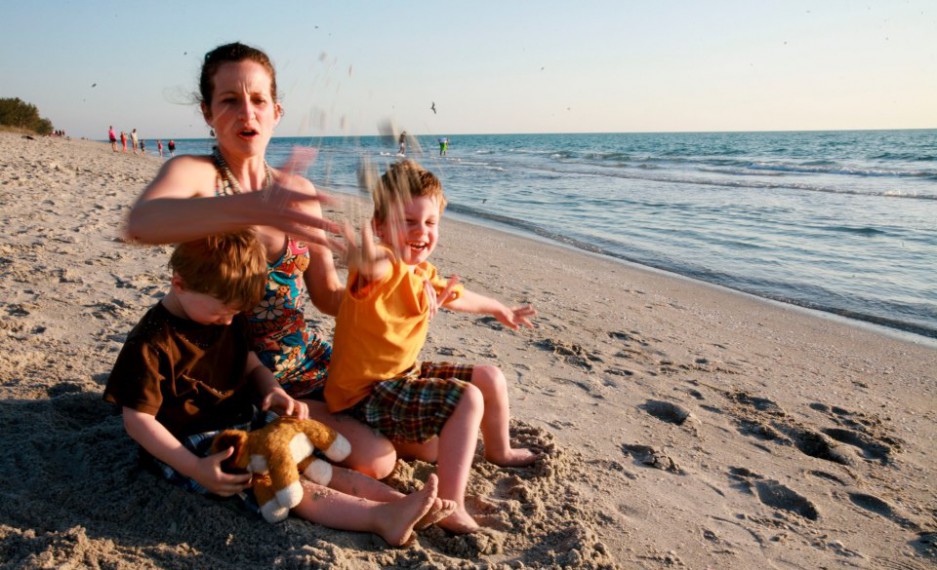 This weekend, Bunz had a playdate with a little girl who genuinely loves playing with him, and he with her. It’s the first time a kid has asked to come over and play with him. I’m trying not to make a big deal about it, but … !!! Bunz has a FRIEND! It’s totally a big deal!

In the interest of playing it cool, though, let’s pretend that it’s nothing. Kids have friends. Whatever. But to be honest, it just never seemed like Bunz was into other kids. Given the choice, he prefers their moms every time.

I can totally understand his fascination with this particular mom. I like her, too. It might be her tattoos. But I also like her because we laugh at the same things, which is important. And her little girl is sweet and mellow and makes me wish I could be 6 years old again.

So when the mom flagged me down one day after school to tell me that her daughter wanted to play with Bunz over the summer, I was only a little skeptical. Did I think she was making up this story just to be nice? Absolutely. Did that bother me? Not too much. So I said sure, let’s get together. And then I thought, crap. What are they going to play with?

The list of things Bunz isn’t really into includes food, stickers, kids his own age, following directions, loud noises, doctors, Legos, superheroes, dinosaurs, arts & crafts, cars, and most mainstream toys. He prefers solitary activities in the company of others: playing his piano, reading books, singing Broadway songs, solving math problems. Our house is full of toys, but Bunz only likes one: my old baby doll Ellen, which he insists is a boy doll named Drink. Bunz likes to ask me how old Drink is. I tell him Drink is 36. It’s just that Drink didn’t eat his veggies as a child, and now he’s only 1 foot tall. That’s what happens when kids don’t eat, I say.

But sometime this past year, Bunz started to enjoy board games. Candyland, Chutes and Ladders, even Scrabble Junior. Finally! An opportunity for interactive play! This has been great in the after-school program. As it turns out, Bunz is quite the rule enforcer. He might act like rules are beneath him, but heaven forbid another kid goes the wrong way down a chute or ladder because Bunz will not stand for that crap. His new appreciation of rules has been super helpful around the house. Instead of having to check the toilet seat and bathroom floor before sitting down, I can now post a sign on the door that reads, “Little boys must use other bathroom!” It’s magic! I might be selfish, but I hope this phase lasts. The possibilities are endless.

Anyway, back to the playdate. When I told Bunz that his friend wanted to come over, his response made my heart ache with gratitude for this little girl and her mom. “Yeah! Yeah! I want that!” he said, enthusiastically nodding his head. In that instant, I became guardian of his heart and decided that we could not, under any circumstances, cancel this playdate. Even if both families came down with the flu. Even if there’s a natural disaster and the city is evacuated. This playdate would happen. No. Matter. What.

If all else fails, I thought, they can just play Candyland for a couple of hours. How bad could that be?

Luckily, we didn’t have to find out because Bunz magically transformed into Prince Charming as soon as the little girl’s family walked into our house. I couldn’t believe my eyes. Without prodding or involvement on my part, Bunz and his friend disappeared together and re-emerged at the piano. Then they played school. And house. And swung in the hammock. And watched a video. It was all very amazing and sweet. And normal.

And interesting. Bunz and Little Bear are only a year apart so naturally they play together at home. But their interests are so different that usually Little Bear ends up bossing Bunz around and Bunz just goes along for the ride.

This, by contrast, was interactive play. Real interactive play. Play that both kids seemed genuinely interested in. Was I dreaming? I wasn’t sure. But god, how I love little girls. They have the biggest hearts.

While Bunz was playing with his friend, her mom and I had a nice playdate too. I’m amused to share with you that I now have a friend who is significantly younger than me. I have many friends who are significantly older than me, but this is a first. Before the playdate, my inner introvert felt fairly certain that nothing I could say would even remotely interest a person this young. For 2 whole hours. I felt stressed. While I waited for them to show up, I stood at the refrigerator and debated whether to brace myself with iced coffee or a shot of Kahlua.

But as it turns out, we had a great time and there were a million things to talk about. Interesting things just kept coming out of our mouths. There will be a next time, we agreed. And at that next time, there will be wine.

Not everyone enjoyed the playdate, though. Kitty Little lay curled in her pristine cat bed and cast judgmental stares at Jake the dog and the little girl’s 6-month-old Husky puppy, who were sniffing each others’ tails. Jake was alternately ok and not ok with the playful Husky. He wasn’t exactly a gracious host, but he did ok. For the animals, it was a lesson in tolerance.

For everyone else, a lesson in tolerance – for once – was not the point.

What a perfect day. 🙂